St. Columba’s School is a highly acclaimed Christian Brothers institution. Amongst the best schools in the country, it Is widely known because of its prime location in the very heart of Lutyen’s Delhi, because of its long list of distinguished alumni, because of it’s dedicated staff, it’s exuberant present students and it’s leadership in education.

Albeit a late entrant to the Christian Bothers family. St. Columba’s took next to no time to become their premier school. St. Columba’s, which began in 1941 with a small complement of 32 students, now has over 3400 students with many names on the waiting list for admission. The school’s impact and continuations in the field of education was duly acknowledged by The Education Quality Foundation of India (EQFI) when it selected St. Columba’s as the most deserving recipient of "The Whole School Award" for dissemination of quality education. Education World has over the last more than five years being placing the school among the best boys’ schools in the country and the best boys’ school in Delhi. 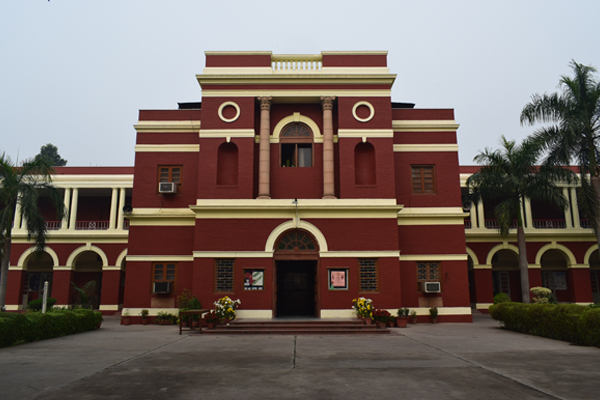 The St. Colurnba’s story began in 1940 when Reverend Sylvester Patrick Mulligan, the Archbishop of Delhi granted the Congregation of Christian Brothers a permanent lease of three acres of land to start a school. The Archbishop believed the new school would be "a monument to the educational zeal of the Christian Brothers". His generosity was not misplaced for the Christian Brothers had indeed established a fine reputation as leading educationists. And they lived up to Reverend Mulligan’s expectations by beginning classes even before the school building was ready. Four Christian Brothers and three teachers began classes for the first batch of 32 students on 7* January, 1941, in tents pitched on land allotted to them near Sacred Heart Cathedral in New Delhi.

The school building developed into an elegant edifice under the careful supervision of Brother Columban Doheny. Its classical architecture merited a befitting name and it was called St. Columba’s, to honour the Irish saint known as the "Dove of the Church". In naming their new venture after the Saint, the Christian Brothers hoped the school’s students would imbibe his many virtues and values - firm resolve, perseverance, dedication, commitment, brotherhood, service to others and pride in one’s self.

St. Columba’s School officially opened on 29th April, 1941 with Brother R E Butler as its first principal. The new school grew in stature under a succession of dedicated principals and soon became the most sought after school for boys in Delhi. In July 1941, St. Columba’s was granted affiliation to Cambridge University for the Senior Cambridge examination. The first tour senior students sat for the exam the following December while 8 junior school students took the Junior Cambridge examination.

By the end of the first decade, St. Columba’s had emerged as Delhi’s leading boy’s school with 500 students and 23 staff members. Each year brought more students and very soon, the school ran short of space to accommodate its growing student body. The situation became critical with students seated in the foyer and corridor, forcing the Brothers to request the Delhi Diocese for more land. The Church obliged with a small plot of land on which the Junior School block was built 1956, by which time the total number of students in St. Columba’s was in excess of 2,235. Another 2.3 acres of land was acquired from the Delhi Development Authority for the Middle School in 1965-66, during the tenure of Brother F.J Steinmayer.

It has become tradition of sorts for St. Columba’s students to be winners in every arena-academes, sports or co-cultural activities. The school, which has followed the CBSE syllabus since 1991, regularly produces merit IITers and toppers at the all India level. This is largely due to the vigorous academic environment, the commitment of the teaching faculty and the Brother’s determination to ensure each student receives the attention and care he needs to flourish and bloom.

St. Columba’s School is deeply committed to including a sense of social responsibility in its students. The Principal of St. Columba’s, has a distinct vision when it comes to his students and their duty to the under privileged. Brother Miranda involves his students in social causes in the belief that society will only change when young people take on the onus of social transformation and are pro-active participants in the mechanism of change. He says, "Without in any way compromising on our commitment to pursue the all-round development of our students, we feel that we need to awaken a social conscience within our boys, so that their growing awareness of the lot of the huge number of people who continue to lead miserable lives even after 73 years of independence, will create a resolve within them to put something back in society in the year ahead".