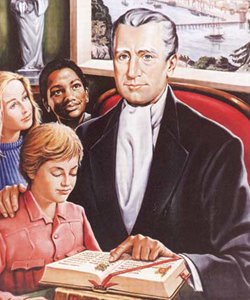 Edmund Rice was born in Callan, Co. Kilkenny, Ireland in 1762. He belonged to a wealthy farming family. After completing his commercial education, he worked with his uncle in establishing a very lucrative ship-chandlers business. In 1785, he married Mary Elliot, the daughter of a prosperous Waterford businessman. In 1789, tragedy struck, his wife died leaving Edmund alone with a disabled daughter.

In 1800, Edmund sold his elegant house and moved into a stable to open his first school in Waterford. His first two companions were Thomas Grosvenor and Patrick Finn who joined him in 1802. The first monastery that Edmund built was called Mount Sion and this is where he died and is now buried.

Edmund’s first society of Brothers were known as the Presentation Brothers. The Congregation of Christian Brothers was formally founded in 1820 with Edmund Rice as the first Superior General. In 1825, the first school outside Ireland was started in Preston, England. In 1838, Edmund Rice resigned as Superior General. In 1841, Edmund fell ill and he died on 29th August, 1844.

Today there are about 1400 Christian Brothers in 28 countries world-wide. Edmund was beatified (declared Blessed) on the 6th of October, 1996. The Brothers have recently initiated a process for his canonization (that is being raised to the altars as a saint).